The Patron Saint of Seminarian Moms 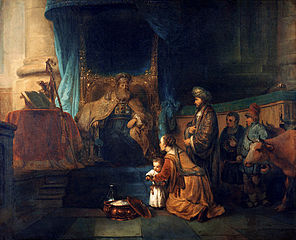 The first reading for today (December 22, 2106 – Thursday the fourth week of Advent) is from first Samuel (1 Samuel 1:24-28) and deals with Hannah bringing three year old Samuel to the Temple and leaving him there. She had promised the priest that if she had a son, she would dedicate the child to the Lord and she held to her part of the bargain.

When my son Evan entered his novitiate, these were the first readings I heard upon going to Mass. Right then and there, Hannah became my new favorite saint. I admired her strength in giving her child over to what she knew was right. The reading don’t say how she felt on leaving Samuel behind but I imagine there were tears and possibly even regrets but she still followed through. (Officially Hannah is the patron of childless wives and infertile women, but there doesn’t seem to be a patron for seminarian moms so I’ve adopted her.)

How often in both my children’s lives I have wished to keep them close so I could protect them. Every mother feels that mix of joy and sadness when their child moves away and leaves their protection. For most children, they eventually form a bond with one special person who enters their life and is there to help them. For my son, that isn’t an option and I fear him having no one to help him.

This is of course not true. Besides the counsel and wisdom of the brothers within his order (for a secular priest it would be the formation group and his peers), he has the Holy Spirit to guide him and be his counsel. This does not mean I stop worrying about him, or wanting to know he is safe, but I remind myself that I must give him fully to God.

This year my husband and I approach our first Christmas without him home with the family. While we grieve his absence during the holidays, we are lifted up but the words of Mary “My soul proclaims the greatness of the Lord, My spirit rejoices in God my Savior” and realize our son is in good hands.

A Merry Christmas to you all and a Blessed New Year.

View all posts by KitC