Cassock Day: A Rite of Passage

Early in my son’s discernment process, one of the biggest shocks was related to something very concrete, not spiritual.

About 2 weeks after my son first told me he thought God was calling him to the priesthood, I attended a women’s retreat that had been planned for several months.

In God’s perfect timing, it was exactly what I needed to get away and spend time in prayer and reflection to sort out my feelings, confusing thoughts and my imagination running wild.

At that time, I was struggling with the objection: “He is too young”.

It wasn’t the idea of discerning a vocation, just not right now.  He hasn’t even been out in the world yet to see what else is out there.  I didn’t want him to rush headlong on a whim or idealized fantasy and then feel trapped with a decision he made when he was so young. Remember, this was 2 weeks in, so it is easy now to pick out my misconceptions about discernment.

Arriving at the retreat a little late, I was looking for my assigned room, when I spotted a young man with a cassock and collar up ahead.

“Excuse me, Father, can you tell me where Tannery Hall is?”

When he turned around, the shock almost knocked me over.  This young man looked about 16 years old!  He graciously showed me where to go and helped me with my luggage.  At this point, I was reeling.  A few hours later I found out that this was a 19 year old seminarian who had just finished his first year in college seminary. He was helping the priest leading the retreat.

Now in my Catholic playbook, if you are wearing a cassock and a white collar, you are a priest.  I know I haven’t been around a lot of seminarians in my life, but I thought this was a pretty stable concept.     When did this happen?  When did seminarians start dressing like priests?

One of the traditions for new seminarians is something called “Cassock Day”.  This is when the new men have their 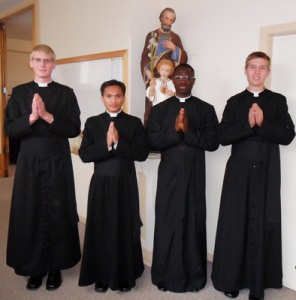 cassocks blessed and are now allowed to wear them for specific functions in seminary; sort of a rite of passage.

Cassock Day last year was the first time I ever saw my son dressed like a priest in a cassock and collar.  My very first thought was that it looked like he was dressed up for Halloween.  The clothing was in such a juxtaposition to the son I knew.  But he was so happy and proud, I couldn’t help but be happy for him.

All this back story is leading up to a posting on Seminarian Casual, the blog for St Charles Seminary in Philadelphia, about Cassock Day this year.  It describes the history and significance of the cassock.  Once you read it, you will understand why seminarians wear the cassock proudly.

This weekend here at St. Charles is the annual “Cassock Day” celebration for every new man. Cassocks are the black, button-down robes that seminarians and priests, wear for liturgical functions. On Saturday, our cassocks will be blessed and we will be allowed to wear them for the first time since entering the seminary.

As a new man, I wanted to find out many things about the Roman Cassock in preparation for this day. There are many interesting facts that I found about the cassock, such as the normal cassock has thirty-three buttons symbolizing the Earthly life of Christ. Or that the five buttons on either side of the sleeves symbolize the five wounds of Christ. But the most interesting fact that I found was that the cassock was once worn by highly esteemed soldiers riding to the battlegrounds of war. The new soldiers would ride after them, recognizing the garments in which they had on.

We, no matter what denomination, are being thrown into battlegrounds between good and evil every day. The sad truth is that most of us choose not to follow the “esteemed soldiers,” but rather try to lead ourselves with no aid. We abandon our brothers and sisters and end up being berated by the enemy. But, lucky for us, those “esteemed soldiers” never turn their backs on us. When they see us turning away, they find us and remind us that there is a battle to be won, a battle for Christ and His love!

The cassock is not just a cloth priests, deacons, or seminarians wear “just for the heck of it”, but it is a sign. It is a sign of Christ’s love for the world. It is a sign of “esteemed soldiers” who try to lead all to victory. Gustave Flaubert, a famous French author, once said, “The true poet for me is a priest. As soon as he dons the cassock, he must leave his family.”

The priest, or seminarian, must leave his family for the sake of protecting and leading God’s children. He symbolically accepts this task by putting on the cassock. He is now an “esteemed soldier” for Christ and His Church.

Now all of us seminarians, whether new men or old men, are not worthy to receive or to even wear the cassock. To think of all the men who have worn it before is quite literally feeling like a midget in a giant’s footprint! But whether we feel like this or not, it is a symbol of Christ in the world in which we are all called to share, especially those discerning the possibility of priesthood.

The cassock, out of everything it is, is a pure sign of love. And that, for all of us, should give us a motive for praying for our priests, bishops, and pope. We should pray constantly for our “esteemed soldiers” and pray that one day these warriors for Christ and His Church may lead many into His Kingdom.

You are all in our thoughts and prayers, but I also hope we are in yours. We need good people of God, and you need holy seminarians that can discern if we can fully take on the cassock, a sign of love.

Please know that the authors of this blog pray daily for parents of discerning sons and daughter to find understanding and peace.

I am a 60 something cradle catholic mother of 3 young adults. I am married to my husband for 37 years. My interest in reading and blogging about vocations began in 2013 when my son began discerning a vocation to the priesthood. He is now in his last 2 years of seminary. View all posts by Pam