Journey to Bethlehem; A Christmas Prayer 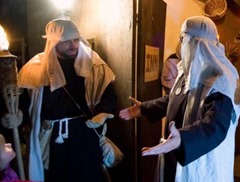 Since 2006 the good Christian folk of Mountain View Baptist Church have been kind in allowing Cathy and I to participate in their interactive drama Journey to Bethlehem.  The play runs four nights each December and typically draws between four and five thousand guests.

The guests are gathered into groups of approximately 40 people and introduced to the character of Gadielle; a working-class resident of first century Nazareth, devoted family man, and occasional target for Roman harassment.  Following a run-in with a local centurion, Gadielle tells the assembled guests that they will be safe if they become part of his family for the evening.  He takes them from the streets of Nazareth to his home where they meet his wife Naomi and their only child, hear a brief speech from the local Rabbi, and once again come face-to-face with the Romans.  On Caesar’s  orders, the “family” must travel from Nazareth to Bethlehem to be numbered in the census and to pay the Roman tax.

Having no alternative, Gadielle and Naomi lead the family south to Bethlehem.  Along the way they encounter more Romans, meet the magi, experience an angelic visitation with the shepherds, receive interpretation of prophecy from another rabbi, encounter more Romans, shop in the busy Bethlehem marketplace, fail to find room at the inn, and — finally — catch up with Mary and Joseph who are caring for their newborn in the stable.  The journey covers nearly a mile of the church grounds and ends with a brief gospel message at a simple wooden cross followed by a visit to the “cocoa tent”.

The logistics of the drama are complex, requiring close coordination among the 150+ cast and crew.  In addition to the cast members at each of the “stations” along the journey, there are eight or more Gadielle/Naomi couples.  At any given moment there are between four and six “families” somewhere along the journey with new groups starting out every ten minutes.

Cathy and I got involved through my parents who are long time members of Mountain View.  Mom got stepped up first and later Dad joined her.  They recruited us to be a Gadielle/Naomi couple in 2006 and we’ve been in every production since.  Up until Dad’s death in 2011, my parents tended the inn.  Mom continues to be involved as a greeter who hands out Jewish passports to the guests as they register for the journey.

During our participation with the production, Cathy and I have seen some remarkable things.  When the angel appears to proclaim the birth of the newborn king, we kneel in awe and reverence.  More than once, we’ve had our entire family spontaneously kneel with us.  At the manger we’ve seen small children creep forward for a closer look at the doll representing the infant Jesus.  Memorably, this year, Cathy had a brief interaction with a tattooed-and-multiply-pierced young lady who hung to the back of the family during the entire journey.  “Thank you for letting me come along,” she said as the journey ended, apparently grateful to have been included.

At the end of each year’s production, the cast and crew are utterly spent.  The long nights of performance in cold and wet weather have taxed people’s reserve and the final farewells are delivered in raw, hoarse voices.  The guests themselves are no less hardy.  People of all faiths and none travel from all parts of Utah, Idaho and Wyoming.  They wait in line for hours for the opportunity to spend an hour walking through the darkness experiencing the journey.

I’ve thought a lot about what drives us — cast, crew and guests alike — to go to such extremes.

I think it’s simply the experience.  Journey to Bethlehem is incredibly visceral.  From the first moment of the journey to the last, the family is on the move.  The trail is full of sights, sounds and smells.  The light from a campfire reflects off the polished Roman armor.  The smoke drifts past as the angel proclaims his message of peace.  The merchants of Bethlehem call out to the guests, offering goods for sale and begging for news of the promise messiah. The dark and the cold contract close, convincing everyone that we are indeed travelling through the ancient world.

Human beings, I think, crave an experience of faith.  The journey gives that to them.

One of the problems with religion in America (and perhaps the western world in general) is that we have over-intellectualized it.  We treat belief as a subject for academic study; something that can be gained or given through mental exercise.  In so doing, we have traded away the best part of faith.  It is little wonder people are wary of religion; we talk to them about God, but never show Him to them.  We are like professors trying to frame a scientific explanation for love and completely missing the point.  Faith isn’t subject to rational evaluation.  It is a suprarational act.

Perhaps it is time we remember that and invite the world to share in the experience of faith rather than endlessly debating it.

Which brings me to my Christmas prayer for all of you.

God, creator of all things,
grant us the grace to encounter Your infinite love
through our experiences with Your bountiful creation.
In the name of the Father,
And of the Son,
And of the Holy Spirit.
Amen