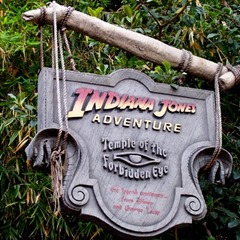 Evan is in the middle of a two week vacation.

(Aside: Yes, the novices and students get vacation time every year.  With the Paulist Assembly complete, they were all free to knock off for a couple weeks and travel.)

It’s been a busy couple of weeks for him; he traveled with us to Disneyland and was attending a wedding between two of his good friends from college.

The Disneyland trip was a gift from my mother who wanted to spend some of her money on a multigenerational family trip with all of the grandkids and her one great-grandchild.

Evan arrived in Utah on Friday and we all took off for California on Saturday morning.  The trip went brilliantly.  Cathy, Evan and I attended Mass on Saturday night at Holy Family Cathedral.  On Sunday, we hit the park hard, taking in as much of it as we could.

That evening, something extraordinary happened.

My niece (who had never been to the park before) asked to stop in at a gift shop to purchase a Minnie Mouse tank top.  As she was checking out, we struck up a conversation with Gloria, the helpful cast member behind the counter.  My niece commented on a tutu hat that someone outside was wearing and Gloria seized the opportunity to show us where the hats were stocked.  She decked out Cathy and our niece with the tutu hats and got the boys and I to wear Sully hats while we all posed for a picture.  It was one of those silly-but-fun moments that so endears the park to Cathy and I.

Then something remarkable happened.

Gloria asked about our visit and how long we were staying and then she said, “Stay right here.  I have a surprise for you.”

Oh?  She vanished into the back for a few minutes and I started to wonder if she had gone for security to deal with an excessively exuberant family.  She reappeared, handed Cathy a slip of yellow paper and said, “This works just like a Fastpass for the Indiana Jones ride.  Enjoy!”

We stammered a thanks, hurried out the shop and across to the Indiana Jones queue.  We had wanted to ride it a second time that day — my niece declared it one of her favorite rides — but at that point the wait was approaching 60 minutes.  At the end of a long day on the park, that seemed a little bit too long to stand in line.

Gloria’s generous gift got us to the head of line and on the ride in no time.

All of which actually got me thinking about the sacraments and grace.

You see, I think Gloria’s gift to us makes a pretty good object lesson on the sacraments.

Let me start with a couple of definitions and I’ll see if I can make my case.

In the summary of the section on the sacraments, the Catechism states:

(1131) The sacraments are efficacious signs of grace, instituted by Christ and entrusted to the Church, by which divine life is dispensed to us. the visible rites by which the sacraments are celebrated signify and make present the graces proper to each sacrament. They bear fruit in those who receive them with the required dispositions.

Which calls back to the Catechism’s definition of grace:

(1996) Our justification comes from the grace of God. Grace is favor, the free and undeserved help that God gives us to respond to his call to become children of God, adoptive sons, partakers of the divine nature and of eternal life.

(1997) Grace is a participation in the life of God. It introduces us into the intimacy of Trinitarian life: by Baptism the Christian participates in the grace of Christ, the Head of his Body. As an “adopted son” he can henceforth call God “Father,” in union with the only Son. He receives the life of the Spirit who breathes charity into him and who forms the Church.

(1998) This vocation to eternal life is supernatural. It depends entirely on God’s gratuitous initiative, for he alone can reveal and give himself. It surpasses the power of human intellect and will, as that of every other creature.

Go back and take a look at that phrase buried in the middle of 1996 — free and undeserved help.

The gift that Gloria gave us was freely given and undeserved.  There were thousands of people on the park that day and we were no more deserving of special treatment than anyone else.  In all honesty, I’ve no idea why Gloria picked us to be recipients of her generosity.

Which is the same paradox every person faces when confronted with God’s grace.  Why should God choose me?  Why am I granted the gift of faith when others aren’t? It is — as they say — a mystery.  The only thing we can really control is our response to the gift.

And that brings me to the sacramental parallel.

Gloria’s gift was embodied in a piece of paper.  It bore Cathy’s name, the name of the ride, and a few other points of data.  On it’s own, the paper was unremarkable; just another of the thousands of forms that corporations generate.  It became personally powerful to us when we accepted it and used it for its intended purpose.  More than a mere slip of paper, it moved us to the head of the line.  We had to claim the reward by being in the right place and ready to act.

In the same way, church affirms that the sacraments are a mechanism of conferring God’s grace.

(1127) Celebrated worthily in faith, the sacraments confer the grace that they signify. They are efficacious because in them Christ himself is at work: it is he who baptizes, he who acts in his sacraments in order to communicate the grace that each sacrament signifies. the Father always hears the prayer of his Son’s Church which, in the epiclesis of each sacrament, expresses her faith in the power of the Spirit. As fire transforms into itself everything it touches, so the Holy Spirit transforms into the divine life whatever is subjected to his power.

(1128) This is the meaning of the Church’s affirmation that the sacraments act ex opere operato (literally: “by the very fact of the action’s being performed”), i.e., by virtue of the saving work of Christ, accomplished once for all. It follows that “the sacrament is not wrought by the righteousness of either the celebrant or the recipient, but by the power of God.” From the moment that a sacrament is celebrated in accordance with the intention of the Church, the power of Christ and his Spirit acts in and through it, independently of the personal holiness of the minister. Nevertheless, the fruits of the sacraments also depend on the disposition of the one who receives them.

(1129) The Church affirms that for believers the sacraments of the New Covenant are necessary for salvation. “Sacramental grace” is the grace of the Holy Spirit, given by Christ and proper to each sacrament. the Spirit heals and transforms those who receive him by conforming them to the Son of God. the fruit of the sacramental life is that the Spirit of adoption makes the faithful partakers in the divine nature by uniting them in a living union with the only Son, the Savior.

Like the slip of paper (only in a much deeper and more meaningful way) the sacraments give physical and visible form to the grace of God.  The sacrament flows from the power of God who can act through the sacrament regardless of the righteousness of those involved.  At the same time, the fruits of the sacrament — whether or not there is a some individual outcome — depend on the “disposition of the one who receives them.”

Just like Gloria’s gift to us, the sacraments are valid regardless of our actions.  Yet, for the sacrament to yield some sort of fruit in us, we must be properly disposed to make use of the grace it imparts.

Finally, the gift was a reminder that you never know how much of an impact you might have on other people.  Gloria’s generosity certainly made this a memorable vacation for us.